Iâ€™m happy to have Tio Wally (long-time Me So Hungry reader) aboard to send in his eating adventures from across America. Here he is in Napavine, Washington.

I used to stop here at the Ribeye regularly way back when, usually ordering soup and salad. They had really great homemade soups and a decent salad bar. But the big attraction was that they had either prune or date bread â€” I canâ€™t remember which â€” on the salad bar. It was unusual to find and unusually good.

Sadly, the owner retired and sold it to some muff-it(s) who promptly ran the place into the ground. It was amazing how a heretofore thriving restaurant could be turned it into a ghost town so quickly. It was shuttered toot sweet and remained that way for a few years.

The restaurant has been reopened by another outfit for four years or so. (The same company has three other restaurants.) But the salad bar is gone, along with the prune or date bread. Did I mention the bread was incredibly good? I still miss it.

The new incarnation of the Ribeye offers some interesting appetizers, like Deep Fried Dill Pickles, Deep Fried Green Beans and House-smoked & Fried Jack Cheese ($7.99 ea.). I didnâ€™t try any of them because, well, I canâ€™t eat that much.

They also offer daily specials. My waitress, Hannah, told me about the Monday Night Special: Country Fried Pork Chops. She said the chops â€” two 6 oz. pork chops soaked overnight in a brown sugar, maple brine â€” were breaded and fried and smothered in country gravy. If the way she all-but drooled as she described them is any indication, they are very good. Hell, I thought they sounded great and I hate maple-flavored crap.

As per my usual habit, I ordered the dayâ€™s special: Spaghetti and Meatballs with soup or salad ($10.99). I ordered it for a couple of reasons: I wanted pasta and one of the other restaurants under the companyâ€™s umbrella is a pizza joint. I hoped that might be a good omen sauce-wise. It turned out to be a good call.

I started with Cheesy Cream of Asparagus w/Ham soup. Asparagus is the King of Vegetables In my book. Iâ€™m of the mind that when Marie Antoinette said â€œLet them eat briocheâ€ (thatâ€™s what she actually said; no mention of cake.) she couldâ€™ve been truly pitiless and suggested the starving peasants eat asparagus, so noble and delicious are those heavenly shoots.

I prefer my spears steamed, almost wilted, with butter and salt. Although Iâ€™ll eat asparagus whenever itâ€™s offered, the cheese in the soup kind of threw me. Why would anyone do that to asparagus? Itâ€™s not like itâ€™s a semi-industrial vegetable like broccoli, for chrisâ€™sake. Nevertheless, I asked to sample it and â€¦ great googly-moogly, it was awesome.

The delicate flavor of the asparagus wasnâ€™t over-powered by the cheddar cheese and the soup had a nice thick and creamy texture. There were plenty of 3/4â€ pieces of asparagus. It was very filling. I never detected any ham, however. I think it mayâ€™ve been minced and then minced again before it found its way into the pot; I saw some unidentifiable red flakes.

The spaghetti was perfect, al dente and still a little wet. The marinara tasted both incredibly fresh and delightfully refreshing. It wasnâ€™t highly seasoned and let the tomato stand on its own merit. Delicious. The (beef and pork?) meatballs were likewise superb. The reasonably hefty orbs were moist, with an almost creamy texture inside. Good gawd, yâ€™all. And the Ribeye served reall Parmesan cheese, too! While the toast was marginal â€” I want my garlic toast garlicky, damn it! â€”the meal was quite satisfying overall.

I stopped back again about a week later and ordered Meatloaf ($14.55 w/tax) to go. I really wanted to try the pork chops but, being afraid they might taste of maple and being a bit under the weather, I passed. I figure Iâ€™ll try them when I dine in and I can send them back if need be.

The meatloaf was sort of meh. The baked potato was served with a butter mixture that contained both chives and sour cream. It was also served with a roll and a vegetable medley of broccoli, cauliflower and those so-called baby carrots. The veggies were perfectly cooked and delicious.

What was really incredible, however, was one of the soups they had that day: Turkey Curry Rice. This stuff was incredible, with nice little chunks of home-baked turkey in a mild creamy curry base. In retrospect, I shouldâ€™ve just gotten a bowl of that and called it good. Although I quickly ate all the veggies, I barely touched the rest of the meal. Being sick sucks.

In addition to the disappearance of the prune (or was it date?) bread was the absence of a truly wonderful photo. Way back when there was a giant color photo hung just inside the foyer. It was an extraordinarily spectacular photo of the Ribeye sign with Mount St. Helens erupting in the background. I always liked the photo because it took me back. 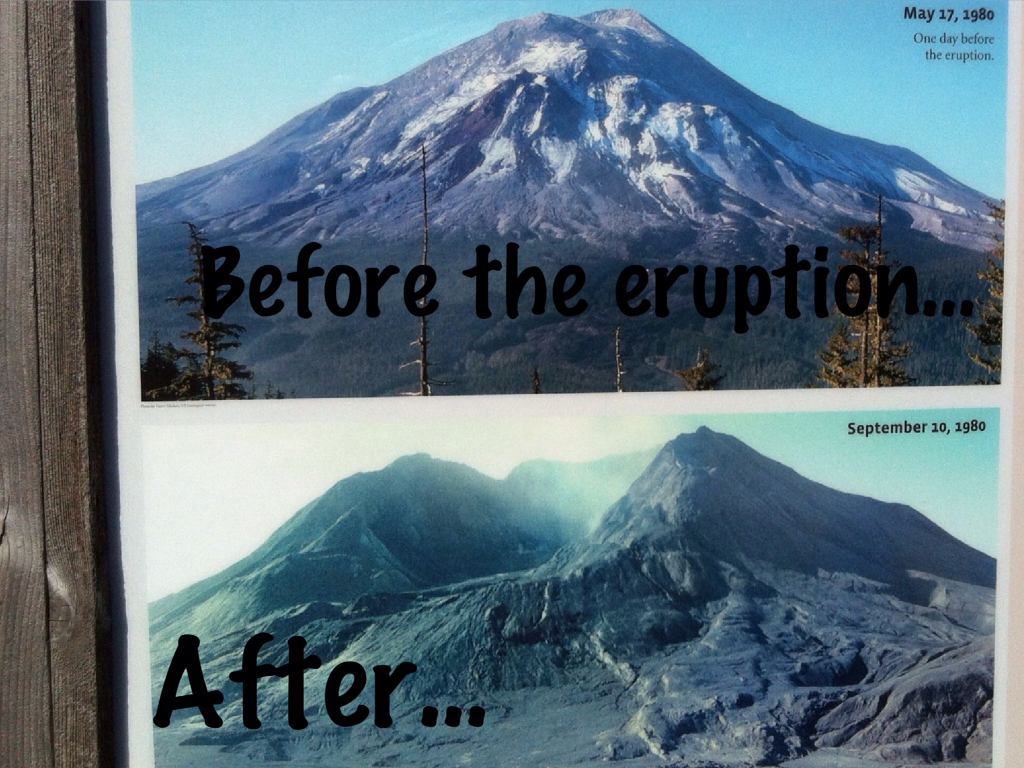 I was one of the lucky schmucks with the dubious distinction of experiencing the mountainâ€™s largesse firsthand. I lived in the â€œfootprintâ€ of the ash fall from the initial blast. Three days of pea-soup fog the consistency of talcum powder. Magnified it revealed its true architecture: shards of glass. You quickly discovered that you canâ€™t seal your house. Itâ€™s impossible. So the ash came in, uninvited.

A helpful Science professor on TV, a volcanologist, noted that ash clouds travel much like nuclear radiation. Thanks for sharing, Doc. Did you know that when Chernobyl blew the highest radiation levels recorded in the US were in Spokane, Washington? It had circled the globe before it came to rest in there.

While I donâ€™t miss the Mount St. Helens Experience too much, I do miss the photo. Almost as much as the bread.

And so we roll.

Tio Wally pilots the 75-foot, 40-ton(max) land yacht SS Me So Hungry. He reports on road food from around the country whenever parking and InterTube connections permit.