I’m happy to have Tio Wally (long-time Me So Hungry reader) aboard to send in his eating adventures from across America. Here he is in Odessa, Nebraska.

I don’t know why the Garmin GPS designates this particular Sapp Brothers truck stop as the “Sapp Bros Landmark.” I’d think the original Omaha location would be. Garmin also says this is Elm Creek but Sapp Bros calls this location Odessa. The mailing address here is Elm Creek. I feel like I’m in Odessa. There is nothing else here so … who’s to know for sure?

Maybe it’s the “Landmark” because the iconic Sapp Bros coffee-pot sign is the only (tallest) notable thing around for miles. Nebraska is like that.

On the other hand, state line to state line Interstate 80 across Nebraska is 455 miles long. Perhaps someone decided that this Sapp Bros was the halfway point. Sure, it’s 36 miles short of halfway if you’re traveling west. But it’s further if you’re headed east. I understand the impatience westbound. I understand even more the sense of accomplishment that comes with the 36 extra miles covered if you’re the poor bastard who’s unfortunate enough to be headed east.

I’ve written about Sapp Bros before and how much I like them. They’re old school, kind of funky. I stopped here this time because I had to take a mandatory 30-minute break. I also knew that Sapp Bros is offering an 8 oz. Steak Dinner for $9.99. Although I’m not really a steak guy, I figured I’d go for it. After all, that T-bone Steak breakfast in Lemoore was so good ….

I showed up a little after 2 p.m., it was just starting to snow, and the place of empty except for me and the server, Dina. Talk about personalized service! I asked her about the steak. She said she’d heard it was good but that she wasn’t really a steak person. (Birds of a feather?) It turned out the steak came only with one side and garlic toast. I was hoping it also came with the salad bar so I could have something green as well. But no.

“We also have Beef and Noodles on special for $7.99,” she said. “Would you like to try it?” Sure, I said. I took one bite of the sample and knew that that was what I was having. I told Dina how good it was. “I’m glad you like it. I made it this morning,” she said, explaining that she cooked in the morning and waited tables in the afternoon. “Of course,” she confessed, “I wouldn’t have told you that if you didn’t like it.”

The special was advertised as “Beef & Noodles, served over mashed potatoes, and garlic toast.” I thought that seemed like an extraordinary amount of starch. So she let me substitute hash browns — hash browns contain less starch, right? — which I got on the side.

The beef and noodles were very beefy and very hearty. The beef was fork tender, like pot roast. I don’t know what they call that kind of noodle but it’s the same ones the Pennsylvania Dutch and many others like to pass off as “dumplings.” It’s all a matter of how they’re cut, I guess. I was really hoping they’d be egg noodles. But hey, what are you gonna to do?

The hash browns were pretty good; crispy outside, soft and moist inside. The garlic toast was garlicky enough that it was pretty good, too.

What made the meal really special — in addition to Dina — was that it was just the right amount at just the right time to be the perfect respite from the crappy, snowy 15° weather outside. I’m officially sick of winter.

And so we roll. 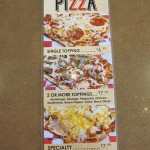 Tio Wally pilots the 75-foot, 40-ton(max) land yacht SS Me So Hungry. He reports on road food from around the country whenever parking and InterTube connections permit.